How to observe the street

“There are always two peoplein every picture: the photographer and the viewer.” – Ansel Adam

We will start this topic explaining very briefly what the shutter speed is in photography: It’s one of the ways we have to regulate the amount of light that enters our camera. By varying the shutter speed, we’ll achieve very different results in the same photograph; freezing the image using high speeds or giving motion to the scene using slow speeds.

This is one of the most beautiful and easy techniques we can put into practice in our street photography, achieving powerful images and a visual journey. Whoever sees the result will appreciate the technique and creativity developed in the shot.

Let's see the following photographs, all taken the same day, from the same position but with different shutter speeds:

The photo below has been taken during 1 second

As you can see, as I decrease the shutter speed of my camera, I give more movement to the people who walk. The person who is sitting, who hasn’t moved during the exposure time (except in the half second shot, where they moved their head slightly) is frozen giving this contrast.

In the first photograph, fired at a shutter speed of 1/125, everything is frozen.

In the second picture, lowering the speed to 1/30, which is a slow shutter speed, we see that almost the same thing happens. The movement is not appreciated but seems to be out of focus.

The image changes as we go down the speed to 1/15 and 1/8 (third and fourth photographs respectively) we start appreciating movement in people, which makes the image much more interesting.

In the fifth and sixth photographs, with an exposure time of 1/4 and 1/2 respectively, you can already see how people are moving and seem to leave a trace of what was going on.

The seventh photograph, is the last one of all, was shot with an exposure time of 1 second. Only the feet and legs that can be distinguished between the stain let us see that this halo corresponds to people, giving prominence to the girl who doesn’t move.

We will use slow shutter speeds in our photographs to give prominence to what doesn’t move.

What shutter speed should we use to give a sense of movement?

To give movement to the image, evaluate what or who you are going to give it to. On the streets you can find cars at city speed, cyclists, people running, people who walk more or less quickly than most... and all of them need a different shutter speed. It’s not the same to photograph a car traveling at 60 kilometers per hour, that the mass of people who are concentrated in a procession during Easter in Seville.

You must also take into account the angle in which you shoot, the more perpendicular the subject you want to give movement to is from you, the more you’ll appreciate the sensation of movement. On the contrary, if the subject moves in your direction you’ll have to apply a slower shutter speed to appreciate this technique.

The more perpendicular the subject to whom we want to give movement is, the more we’ll appreciate the sensation of speed.

Let's see another example, it's one of the photos we MUST NOT TAKE in street photography. I put it as an example in this topic to emphasize that indigent people are an easy resource to photograph, but it’s not ethical to photograph them. They are a resource that will not contribute anything new to what happens in our cities.

In this case, and at the request of the Government of Hong Kong, I did a work about the most forsaken people in the streets of this city. 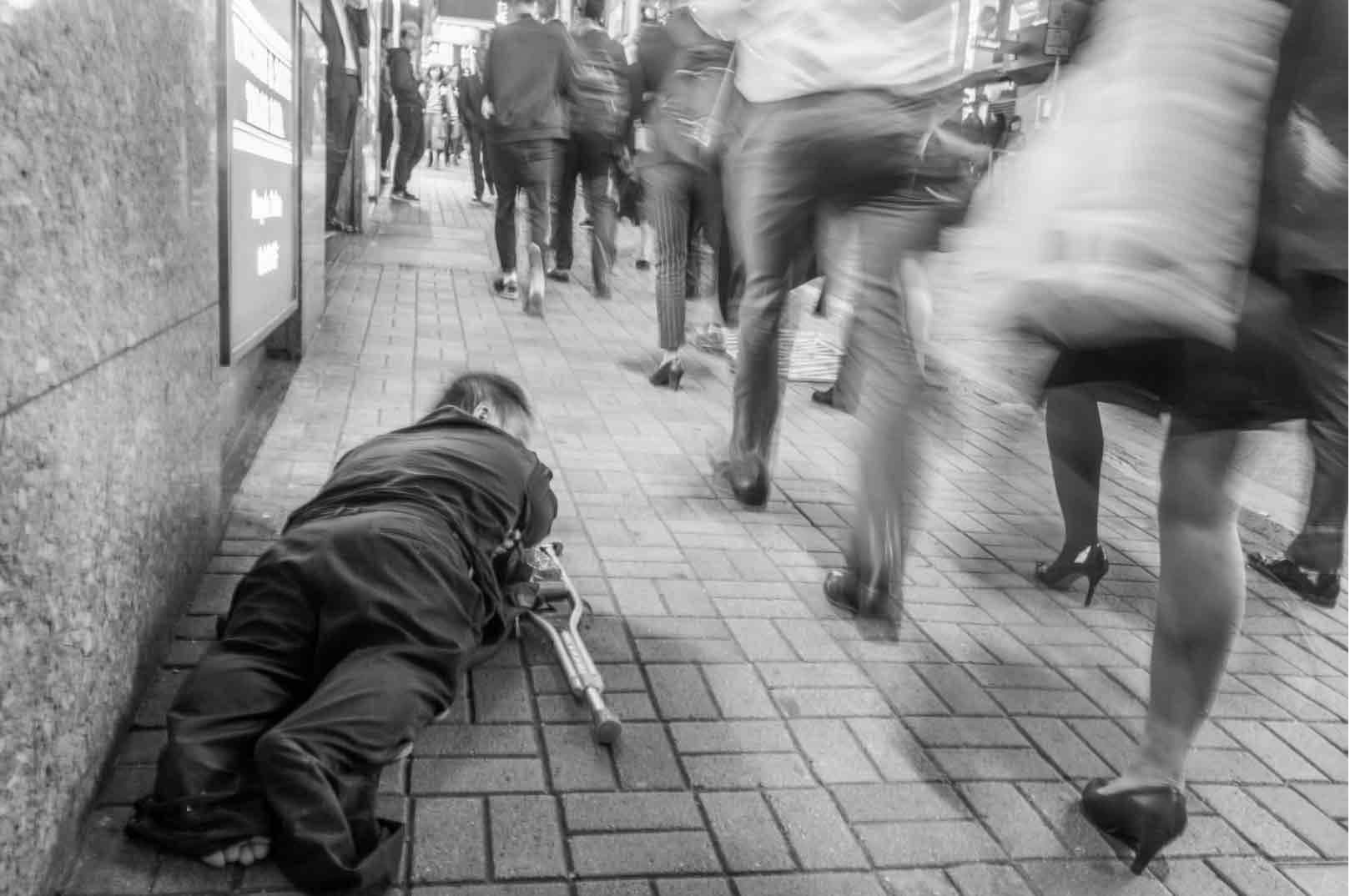 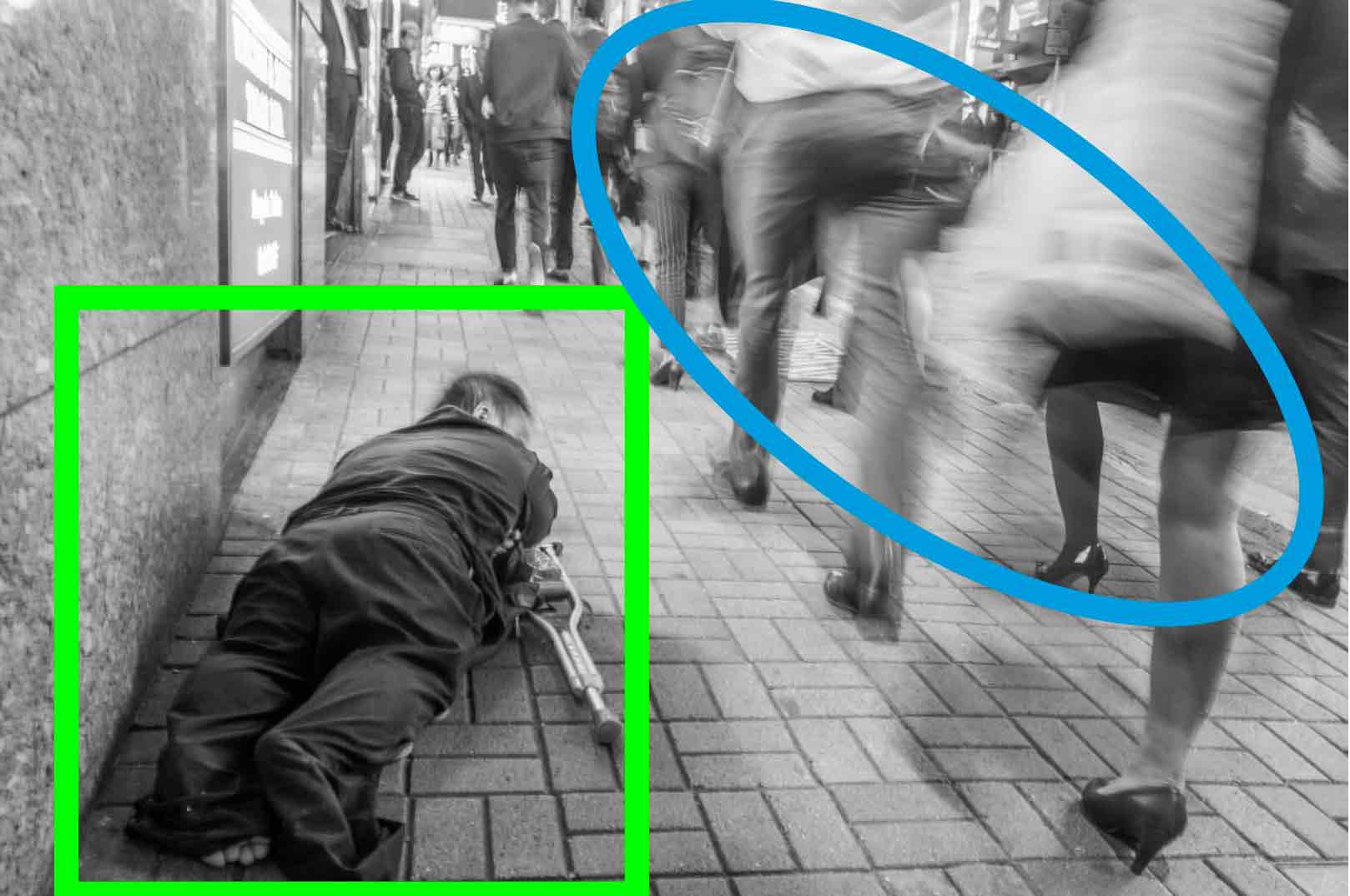 If we compare this photo with the previous one, we see that both are shot at the same speed, 1/4 of a second, but the movement in the photograph in which people walk perpendicular to our camera is more appreciated.

In both we give prominence to those who do not move.

People who attend my workshops ask me many times if a tripod is necessary to perform this type of technique in street photography: ​​a tool that most of them use for their nighttime photographs at exposure speeds of more than 15 seconds.

Well, although the tripod gives us the stability that our own hands are impossible to give, going all day carrying the tripod is heavy, you never go unnoticed, mounting and dismounting makes you bored of the camera and photography. With a little practice (and with modern cameras) we can maintain a stability of up to 1 second holding our camera with our hands. For this it’s very important that we shoot from the waist or the chest, supporting the camera on our body. If we are going to shoot from the height of the eyes, it’ll suffice with 1/4 of a second, getting the desired result most of the time. 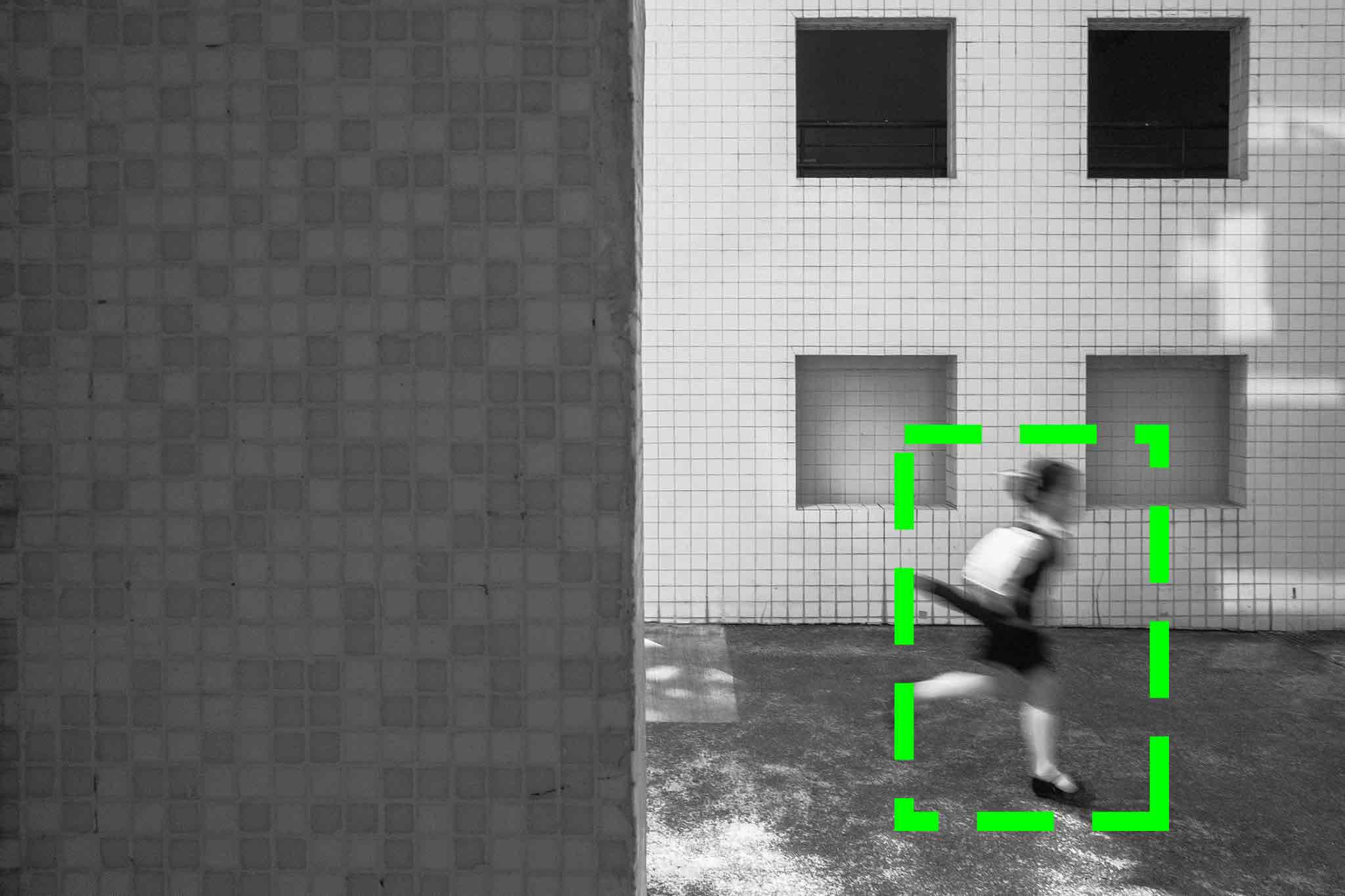 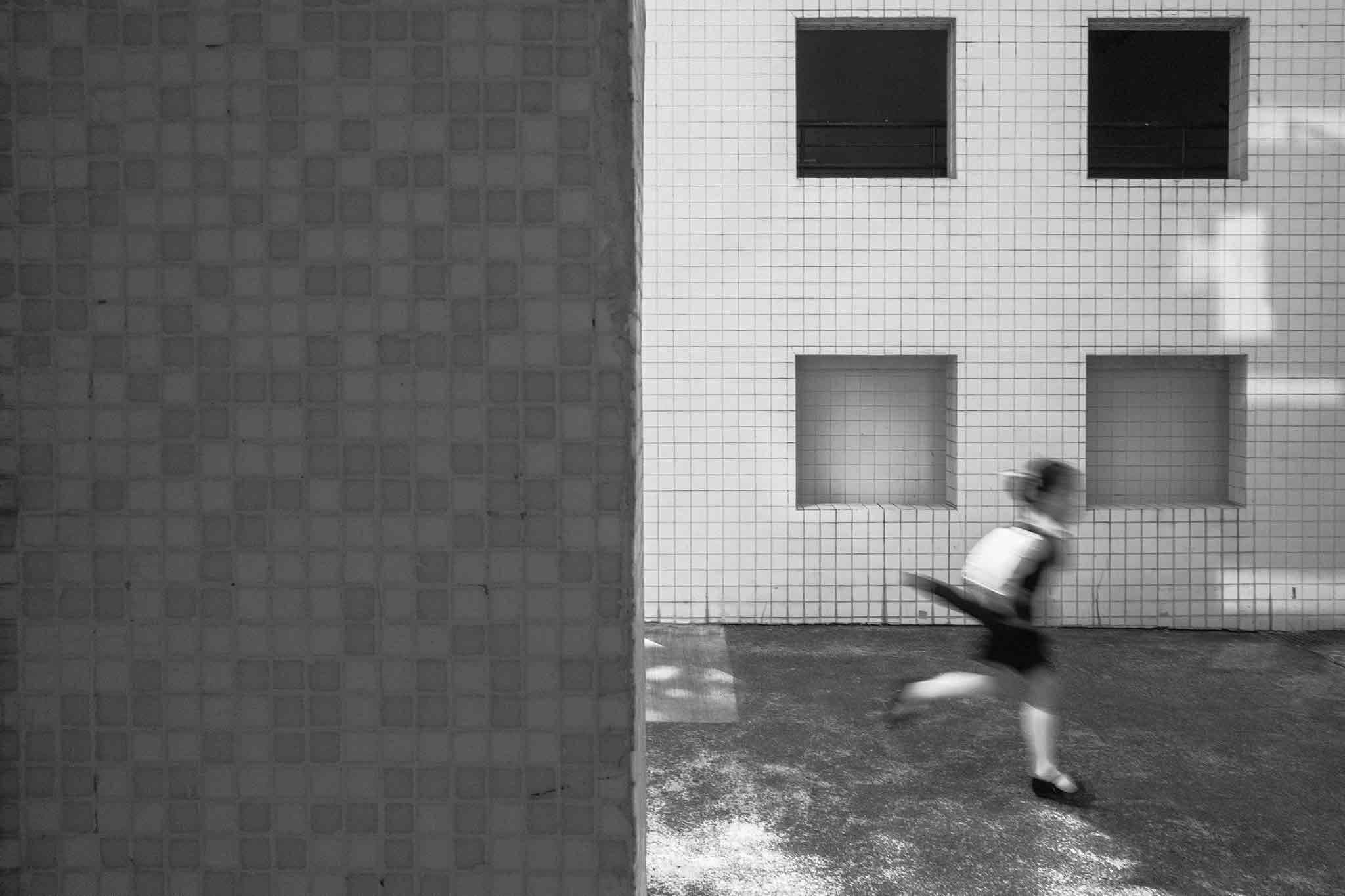 The photograph above, has been fired at a speed of 1/8 seconds and at eye level. There was no need for a lower speed, since everything that happened between my camera and the wall was perpendicular and at a distance of no more than 4-5 meters, where I could perfectly appreciate the movement.

In this case I’d been fishing: waiting for a while until I found a motif/subject to photograph, having found a good composition before.

I found a composition full of geometric shapes and, dividing the frame (see the themes below, Division of the Frame and Geometric Figures), I waited until I was able to photograph a girl running towards her schoolmates.

This is one of my favorite photographs, because of the elements that make up the image and for the technique used. It’s a photograph taken outside during winter, it would be around 14.00 hrs and that is usually a problem to be able to successfully perform this type of technique, since having a strong natural light and lowering the exposure time, the pictures usually come out burned.

Shooting at slow shutter speeds during a sunny day is impossible, unless some type of neutral density filter is used.

However, on less sunny or even rainy days, it’s good to take this type of photography, since we can lower the shutter speed of our camera without fearing to get an overexposed image.

When you find someone standing and everything around that person is in motion, prepare to change the shutter speed of your camera. 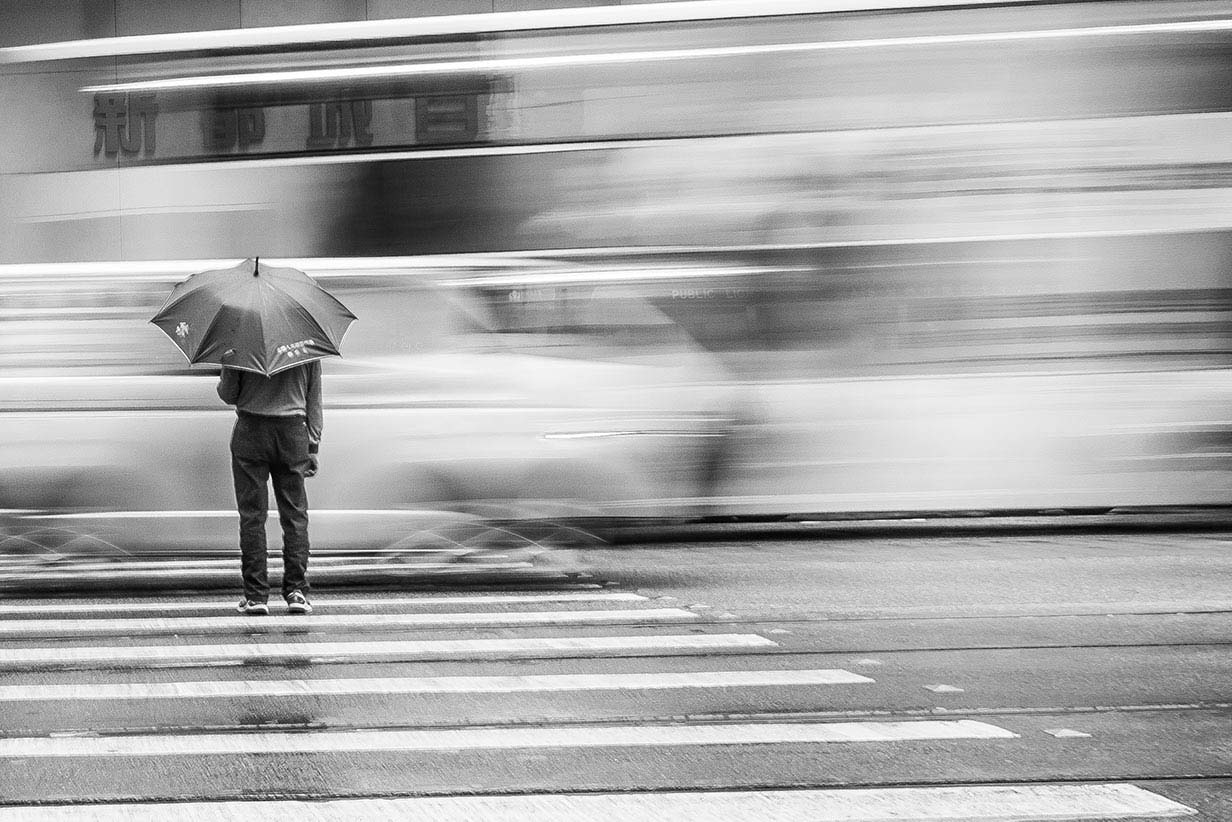 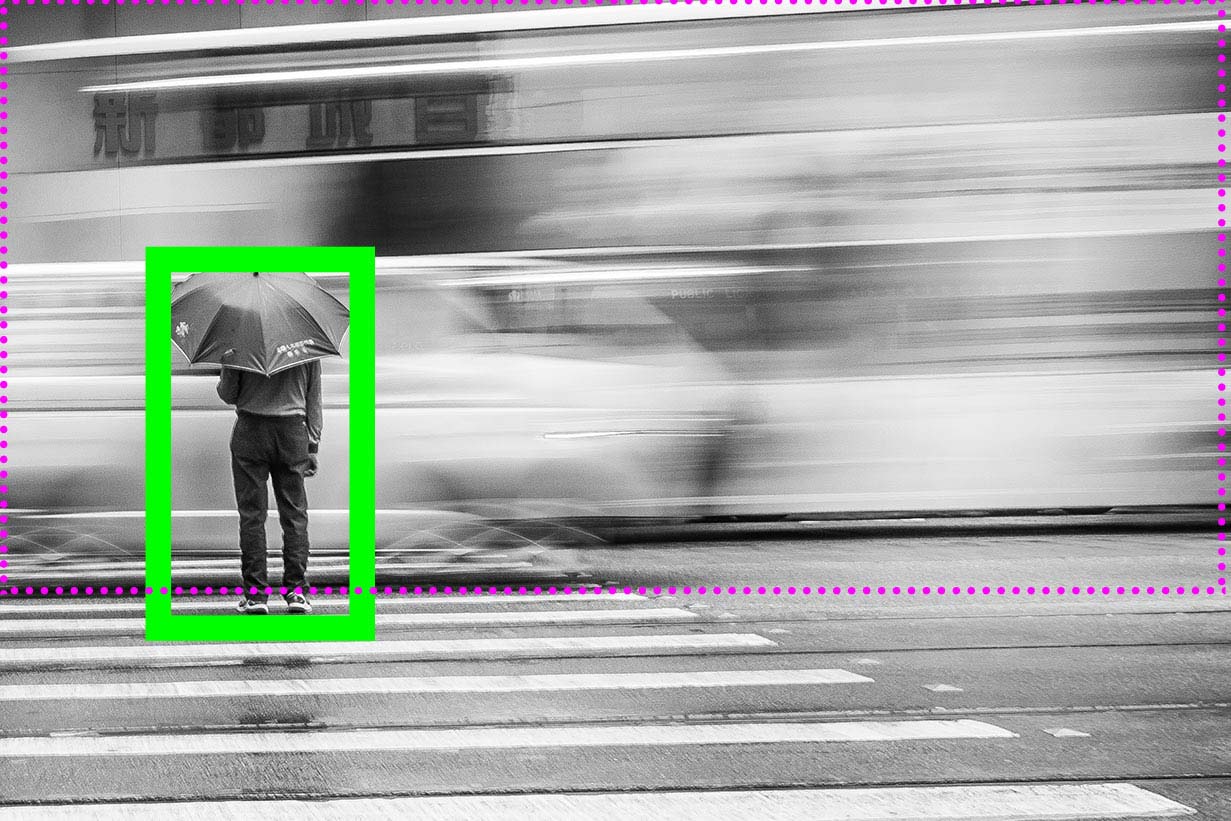 I was struck by the man who wanted to cross the street while it was still green for vehicles, staying in the middle there, with his umbrella. It didn’t take me more than three seconds to set the camera setting to 1/8 and get this image that, if I hadn’t used a slow shutter speed, would have been meaningless.

This is one of the most common questions my students ask me:

How long does it take you to change the setting of your camera?

These days any camera, even the compact ones, come with very handy dials. Switching from a speed (or automatic) to a slower speed, in addition to lowering the ISO, is faster than we think.

Yes, I turn the ISO down as well, since although I don’t have a specific Dial on my camera to bring it up or down, I’ve set it as a shortcut on one of the Display keys, so, when I need to change it, I just press that key and bring it up or down as much as I like.

Many times I even change the opening of the diaphragm as well, either because there is a lot of light, which happens in most cases, or because I want to give another focus to the result. You already know that the more open the diaphragm (lower f-number) the more light will enter the sensor of your camera, and vice versa, the closer it is (higher f-number) the less light it will receive. I usually play with diaphragms from 5,6f to 16f 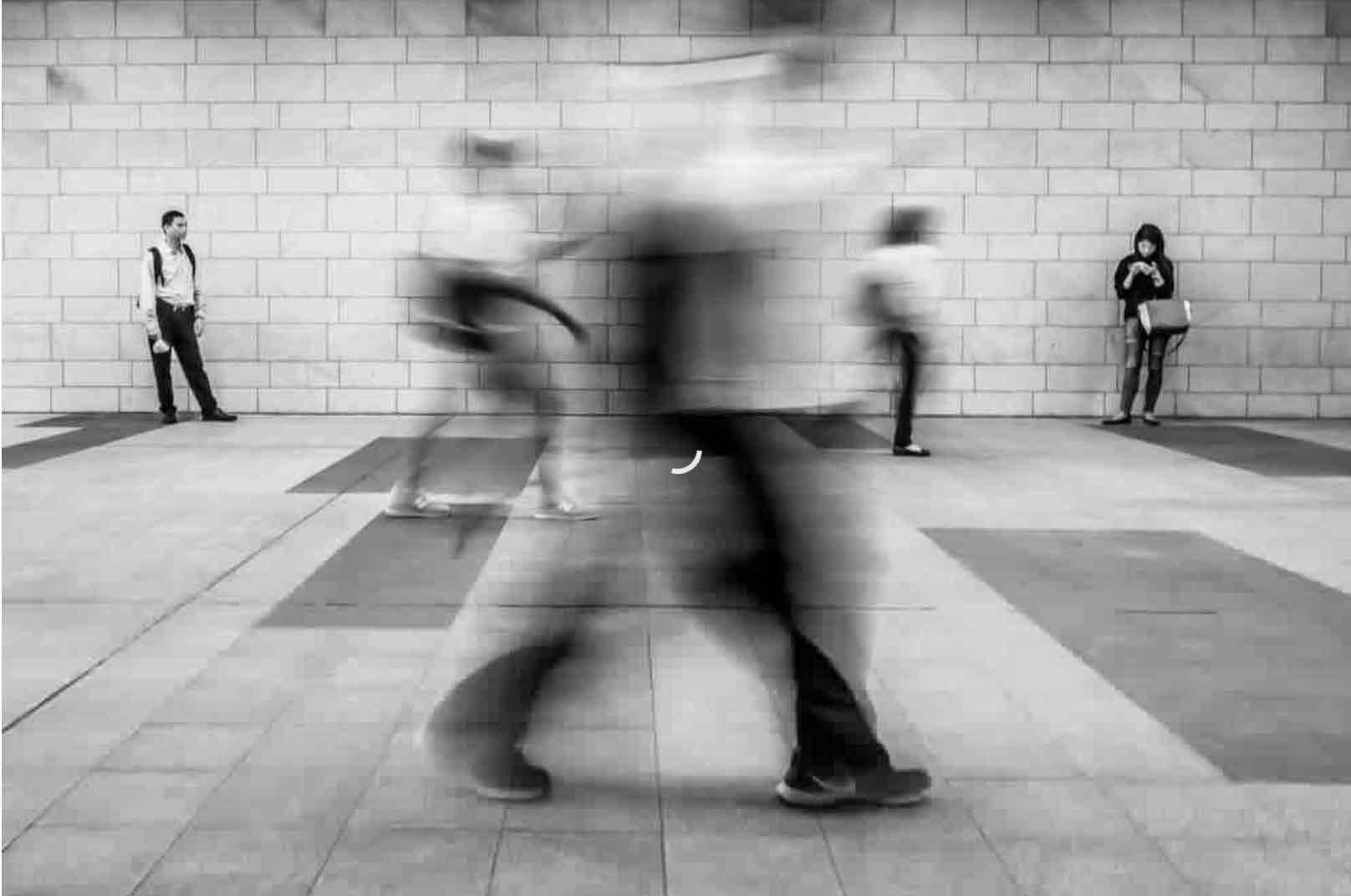 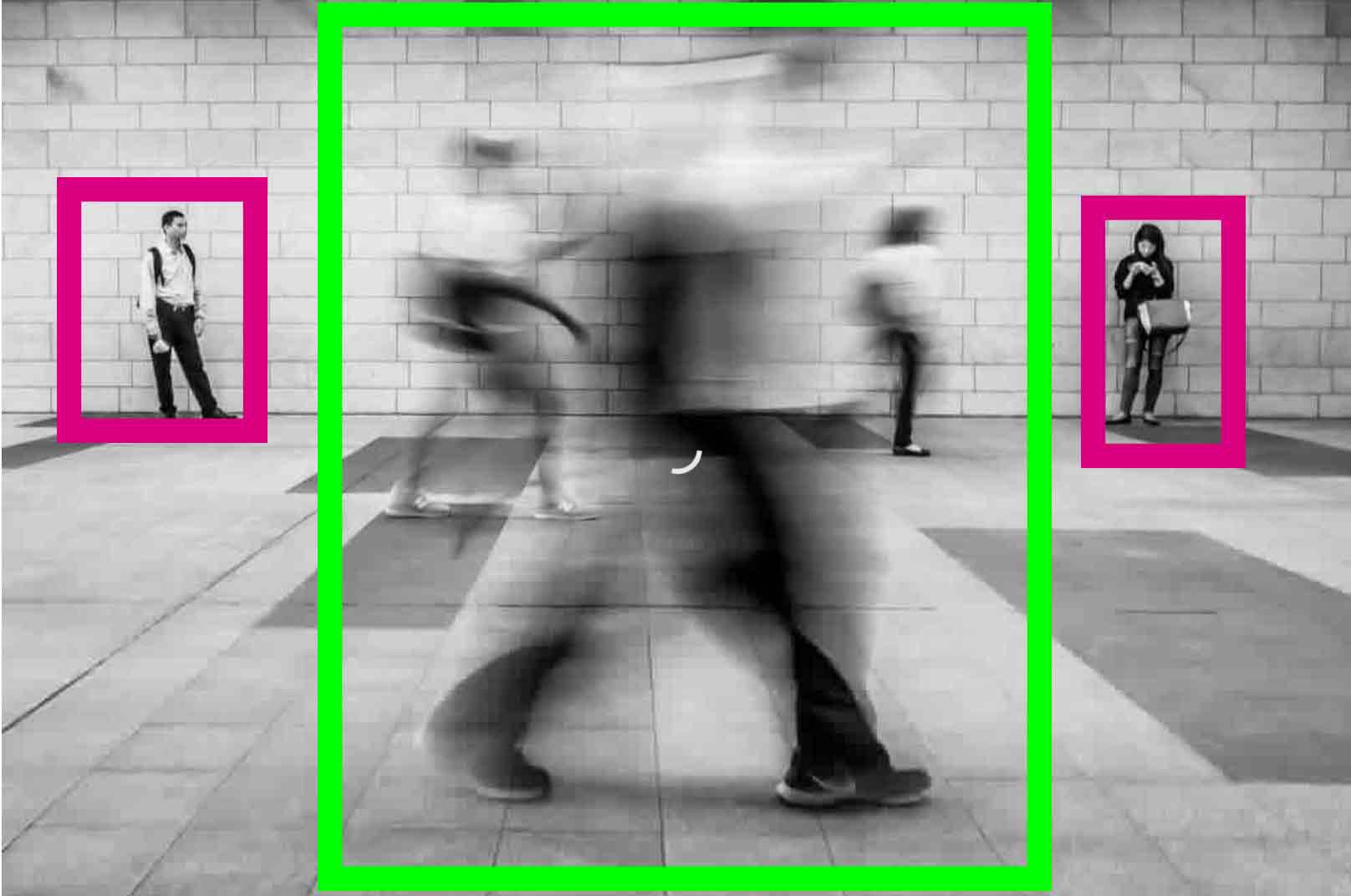 In the picture above we see 5 people. The two that are furthest away remain motionless.

It was at the exit of a subway station in Hong Kong, outside and about 18.00 during summer, where although there is light, it’s not as powerful as it can be three hours earlier. Both of them remained motionless and people entered and left the subway, as in any city where this means of transport exists, every second.

In this picture I expected to catch someone who was in the center, between the two, and closer to me. I was looking for a triangle in the composition, not only I got a triangle, but also two more people.

If we get one or more triangles through the subjects in our composition and we give movement to any of them, the result is already worthy of praise.

Look at this color photograph. Those arrows with the messages of LOOK LEFT and LOOK RIGHT caught my attention. There were a couple of traffic lights to facilitate the passage of pedestrians who wanted to cross and I photographed them in the first place using an even slower shutter speed than the one I used in this picture. I realized that some pedestrians were left in the middle because they hadn’t had enough time to cross and it was when the vehicles were started again.

The pedestrian was in the middle and I just needed to find the other two vertices of a triangle, which wasn’t difficult due to the busy traffic of Hong Kong. It didn’t  take more than 3 minutes when a blue car and a red one coincided in the upper third of my frame giving me then what I wanted: Triangle, with two of the vertices in movement, the colors are blue, red and yellow, which are the primary colors, that although it appeals, it’s purely coincidental.

The difficult part of this shot is to stabilize the camera. I had to take my arms out from the railing of the bridge and start testing, and then balance it in the editing program.

One of the lessons we’ll see in this course is The Division of the Frame, in it we’ll take advantage of a wall, corner, lamppost to divide the frame and find different scenes and stories in each one. We can also use this technique to give movement to what’s being photographed. 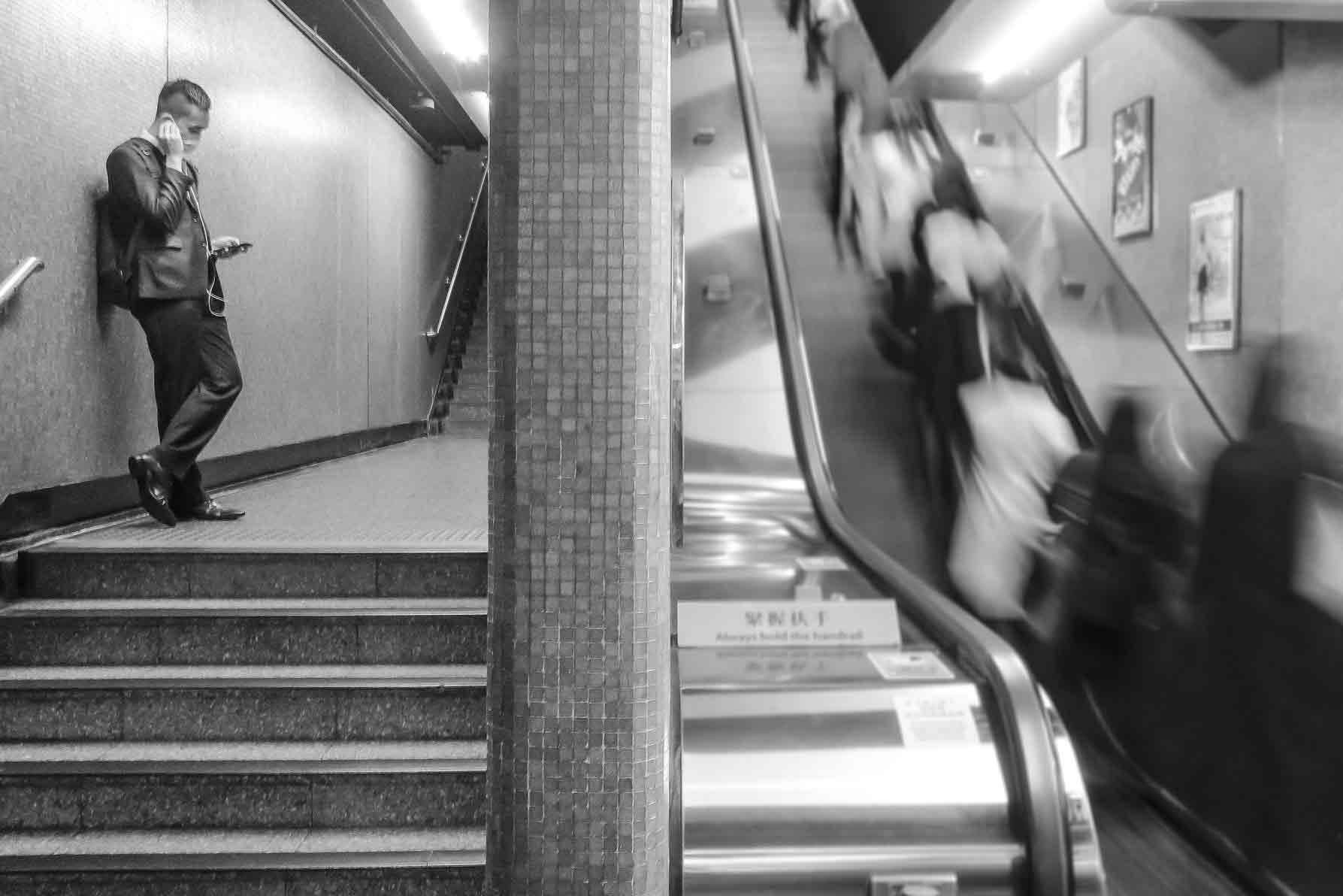 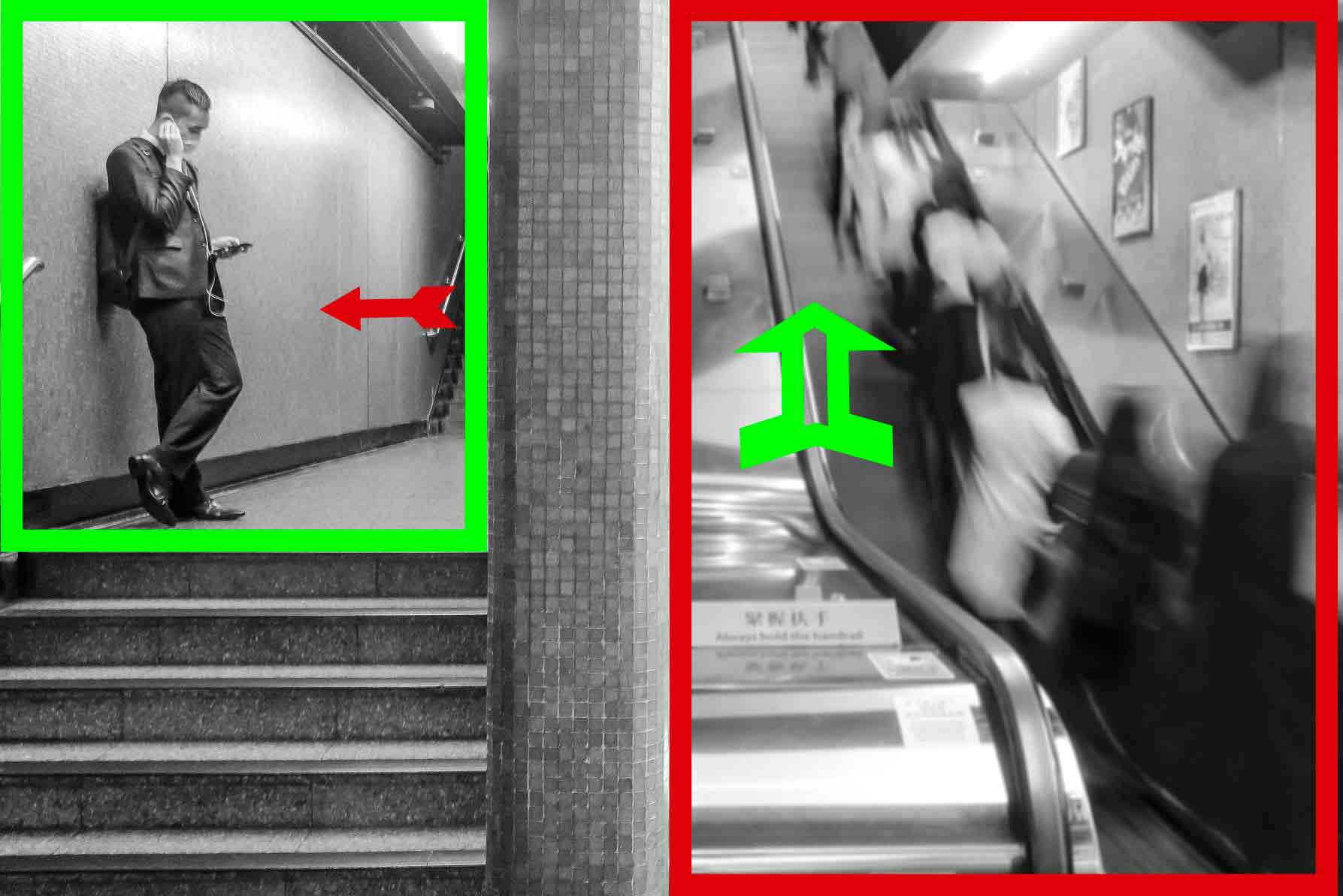 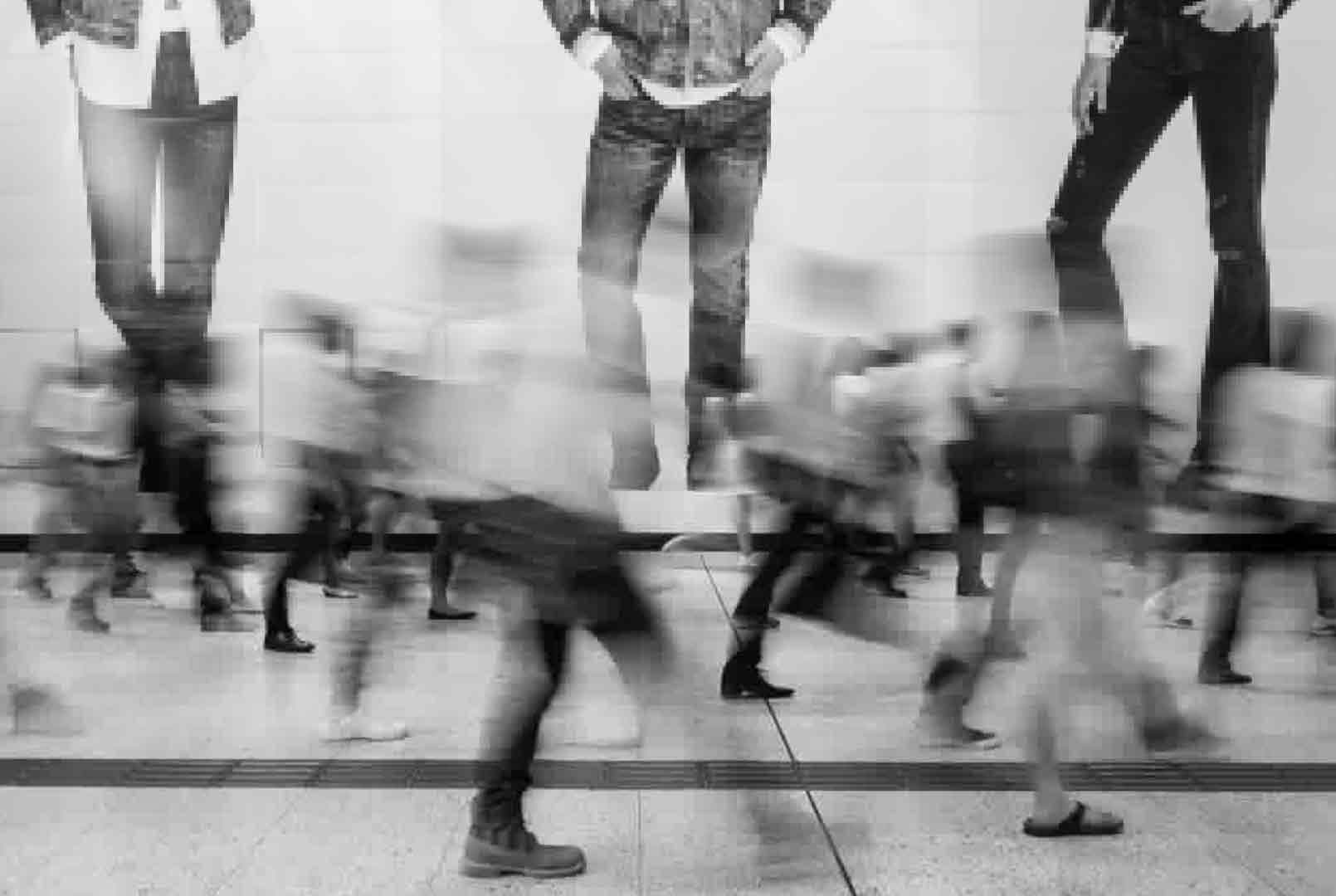 We can use posters to give more emphasis to what’s being photographed, the posters RARELY MOVE and can give us a lot of resources to start practicing this technique.

1. Children in a square poster looking down while laughing

2. People moving in the same direction

When to use the slow shutter speed?

The light is not very strong

In closed areas with artificial light

Do you remember the first lesson, the one where we shot WITH SENSE at people who had their backs turned on us?

To photograph someone's back and one or more elements in motion